Collard Creations has painted a new mural on the back of the Red Apple and Strip Mall, in the Gendis Plaza in Portage La Prairie, Manitoba in 2022. It took 3 months to paint (July 1, 2022 until September 30, 2022). Sarah Collard together with her two kids Sonja Wiebe and Manny Wiebe painted diligently to cover this vast wall – 3 designs in one. Mural launch to be announced (TBA). Thanks very much to James Cohen who commissioned it.

The story behind the mural:

The Climb of Success is a dynamic historical mural which illustrates the process of building the GENDIS Corporation in Canada.  Featuring three main locations in Manitoba, this mural honours the work of 6 Cohen brothers, the development of their business across Canada and their significance to the Canadian economy.  The headquarters is currently located at 1370 Sony Place in Winnipeg, run by CEO James Cohen. The original ‘Gensers Furniture’ was located downtown at 295 Portage Avenue in Winnipeg which is where the Dollarama is today.  The third location is at 80 E Saskatchewan Avenue in Portage La Prairie where a Red Apple and strip mall occupy its space.  Basically it reads continuously from left to right and continues from one design to the next.  It was designed by Sarah Collard, a talented Manitoba muralist who has painted over 50 murals throughout Manitoba, Ontario, Quebec and British Columbia.  Many of those have been through Take Pride Winnipeg.

This mural depicts the Climb of Success from Albert Cohen selling merchandise out of the back seat of his car to the impressive business expansion, locating 6 brothers across Canada to incorporate, then trade on the Toronto Stock Exchange.  Gendis  soon became a thriving business that ran across Canada importing internationally and distributing from the Pacific Coast through the Central Prairies to the Eastern Provinces.  The mural, starting with Winnipeg’s urban scene, the downtown city scape is historic, bright and colourful.  I wanted to make use of the historic arch which was being renovated so I took the old marble blocks and integrated them into the architectural buildings in Winnipeg’s downtown which is a remarkable memory for many.  It hosts Moore’s family restaurant, Gensers Furniture, Sterling, Ricki’s Ladies Wear, Mardi Gras, Eaton’s Toyland, The Nut House, Capitol Theatre, South Sea Restaurant, Fine Furs, Gramma’s, Marie’s Hairstyling, Imperial News, the Pancake House, Manhatten Restaurant, Canada Permanent Trust, Brathraites Drugs, Picardy, The Chocolate Shop Restaurant, Surprise Shoe Shop, Shiffer Hillman Clothes, Neil Young and the Guess Who, the Prairie Roots Rockers, Richardson Securities and Midland Osler Securities.  The mural uses the analogy of a rock climber to parallel this climb of success. Just as the Canadian economy depends on the pipeline and oil market, a mountain climber depends on the varied surface of the Canadian shield to advance in height.  This mural is meant as a way to bring the natural surroundings into the urban setting.  It references the investment trail from the Alberta mountains to Chicago; an international stage.  The business started in 1931 by Albert Cohen and Son and was later known as General Distributors Ltd.  Five brothers joined the company and acted as agents and wholesalers for a variety of products.  There was Morley in Montreal, John (Chauncey) in Toronto, Harry in Calgary, Joseph in Vancouver, and Sam and Albert at headquarters in Winnipeg.  Albert was James Cohen’s father.  The company owned 300 SAAN stores, they imported Paper Mate pens and founded SONY Canada.  Albert Cohen received Japan’s Order of the Rising Sun and was inducted into the Canadian Business Hall of Fame.  Many books have been written about this entrepreneurial giant such as The Entrepreneurs.  Five of the six Cohen brothers have been inducted into the Order of Canada.  Their accomplishments have been immense just as this mural seems to go on forever.  Echoing James Cohen singing, Dreaming My Life Away this mural is a song to the One Great Creator, a thanksgiving for all your hard work.

During the month of September 2022, 5 of my small abstracts will be on public exhibition at Cree8ery Gallery in Winnipeg. Located at 125 Adelaide Street in the core of downtown, district area, these small artworks are also available for sale. They are a mixture of acrylic, graphite and oil paint. Scrapes and scribbles, paint layer upon layer, these contemporary works are nice in any modern architecture.

Located at the corner of 107 Pandora Street West and the corner of Day Street in Transcona, Winnipeg, Manitoba, this mural commemorates the former owner of the gas station and car wash. Currently, a new Tim Horton’s and Petro Canada and Car Wash attract many people.

Henry’s Car Wash has been a social hub in the Transcona community, where people went to clean their vehicles, purchase fuel and groceries and most importantly, stay connected. Ed (Henry) Enns purchased 107 Pandora St West as an opportunity for his son and was the original owner of the car wash. Henry Enns quit his job at Winnipeg Electric to purchase the business in 1965. At that time, it was an automatic car wash with a couple of self-serve bays. Over the years, it changed to have all self-serve bays and added propane and diesel fuel pumps. The business operated as a Gulf station until 1985, when Petro Canada acquired Gulf Canada Ltd.

Henry, along with his wife Erna and their seven children, grew the business into what the residents of Transcona fondly remember. This family arrangement allowed some of the children to work alongside their parents.  It also employed a few local CN workers and Transcona students. The most important person in the operation was Henry. He was always there with a big smile on his face and was welcoming and friendly to everyone. He would visit with the patrons, admire their vehicles, ask how their days were and share a few laughs. He genuinely cared about his customers and always wanted them to feel good.  He loved when kids would visit and always had suckers waiting for them.  An example of Henry’s caring personality is the story of a family whose vehicle broke down just before Christmas; Henry would not leave until the vehicle was repaired and he knew they could all get home for Christmas. The family was overwhelmingly grateful to him.  Although the Enns family sold the service station, the memories remain for those who knew Henry and helped to support the business for over 60 years.  Henry passed away in 2016 and spent 4 years serving in the military during World War II.  Today there is a new car wash on the site, gas station and a Tim Horton’s restaurant.  While Henry may be gone, Henry’s Car Wash will not be forgotten.  Please take the time to welcome our new owners and give them a big Transcona smile.

While I was perusing the City of Toronto StART website (where I am featured), a dentist contacted me and asked me if I would like to paint a mural on the side of his building located at 1244 Gerrard St East in Toronto, ON. We agreed on this image and I painted it in July 2021 while visiting my family. This was the first time I painted a mural after my dear father passed away. Here is the result:

I have completed my metal series and it is being exhibited at the Cre8ery Gallery in Winnipeg at 125 Adelaide Street during September 2021. There are 4 paintings in the series but I began with 3 paintings of nuts and bolts and called it the Handy Manny Series (previously). It started as a way to show students how to scale up a drawing and how to paint it, in a step by step manner. As I was teaching this great bunch of high school students at Mennonite Collegiate Institute, I tried to break down my process into comprehensive lessons (and prove that I can draw). I spent a lot of time teaching my son Manny so I was used to thinking in this way. I started off taking photographs of my friend’s metal shop; close up of motorcycles, parts, screws, nuts and engines. I had this vision of all these metal-like paintings filling the walls of his house [since he had bare walls]. Now, I have completed 4 and they are all up at the Cre8ery Gallery currently. http://www.cre8ery.com

Above is the “Underground”, the 4th painting which I named after the subway system in London, England. The pencil says “Access” on it which is from the Access Credit Union but I like that there are hundreds of interpretations of what “cess” could be.

During the month of April, I took the #inkpril2020 Challenge with my son Manny Wiebe. We endeavoured to sketch once a day for a month and post them on social media. We used Facebook and Instagram. It began with the art teacher at St Mary Catholic Secondary School in Dundas/Hamilton, Ontario posting createwithkiely on Instagram. Here are some of my sketches:

The first mural was painted in 2010 by Sarah Collard. The second mural, as seen below was painted in 2020 by Sarah’s son Manny Wiebe (which was a decade later). He painted it inside my home studio in Morris, Manitoba during the winter months. The pandemic just began and I was pleased to have my two kids home with me. Manny and I sketched every day in April and Sonja took walks with us every day. It was a delight. 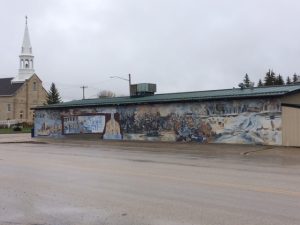 I started this wall in 2019 and finished it in 2020.  It is located on the side of Bigway Grocers in St. Jean, Manitoba and depicts the entire town, both historical and contemporary aspects; Ice road, quad derby, divided boulevard, the cathedral, the 1950 flood, the bridge, farm yards, the convent, the graineries and the ferry.  Thanks to Sonja Wiebe for helping me prime the wall and thanks to Pat Schmicke, owner of Bigway in St Jean for funding it.