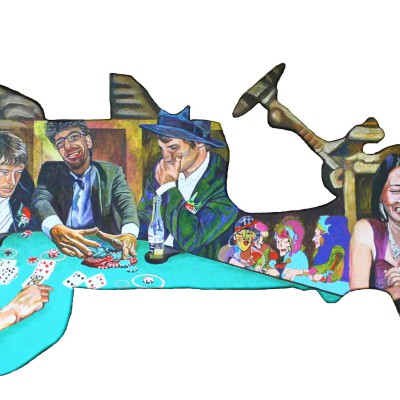 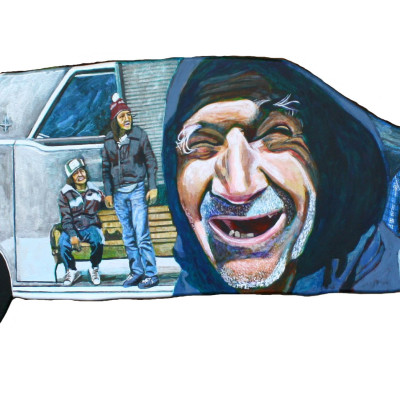 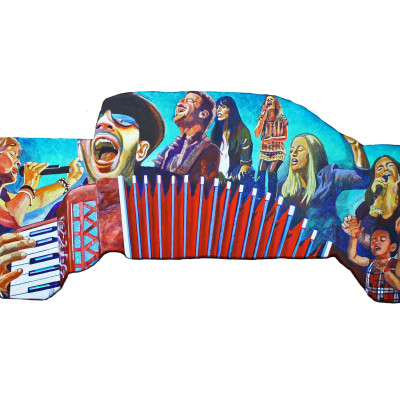 Hockey is a favourite Canadian tradition.  This is the seventh painting in the series of 10, illustrating house league hockey END_OF_DOCUMENT_TOKEN_TO_BE_REPLACED 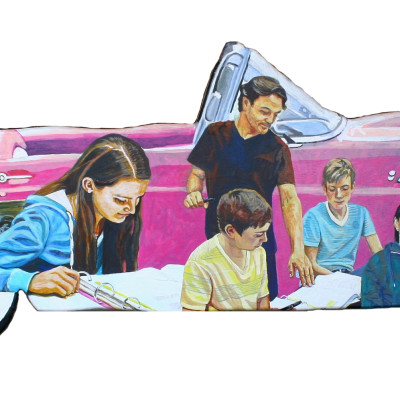 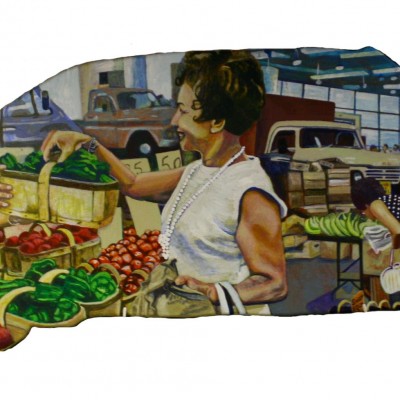 Market Memory, Acrylic on shaped board, 36” x 78”, 2012 This 1956 Ford Fairlane characterized this fun era.  It was END_OF_DOCUMENT_TOKEN_TO_BE_REPLACED 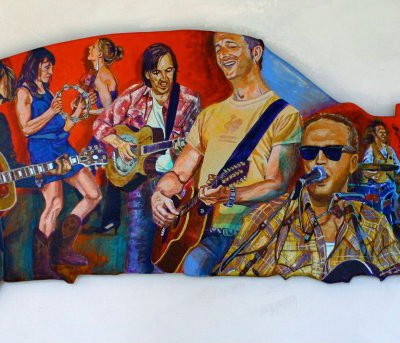 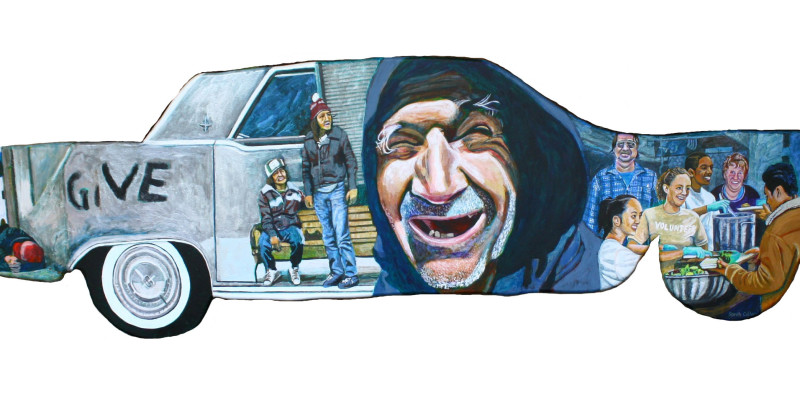 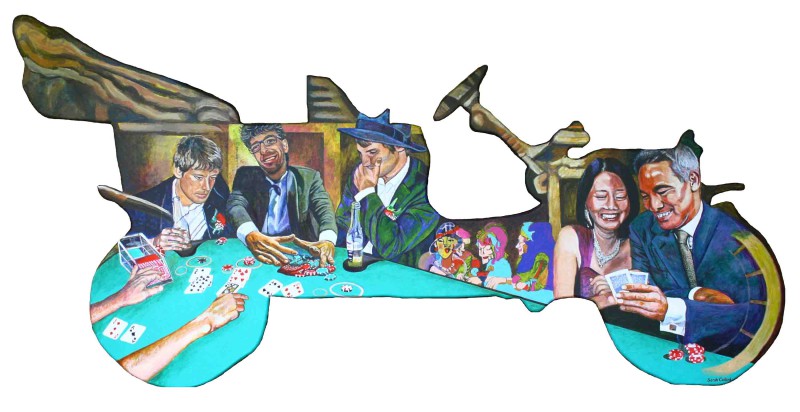 This is the last Ford Motor Vehicle in the series entitled “Vehicular Traffic” and it represents the Canadian social behaviour of gambling.  I used the popular game of blackjack, which is commonly played in Casinos across Canada and is also known as the card game “21” which most people play as kids.  Originating in France, blackjack became popular around the same time as the Model T Ford was distributed (1908 – 1927) The Roaring Twenties; a period of flappers and gangsters with fedora’s, pearls and hats.  Three gentleman play in the rear of the vehicle, with one winning the jackpot.  In the front section, an aboriginal man helps a Phillipino woman understand the game.  The central figures are an experimental element representing an abstract manner in which I depict figures playing cards.  In some of my abstract paintings, I combine blind contour drawings with brilliant colour to create a cartoon look.  This was done to show the creative process of how paintings are made.  I always thought the perfect painting would have evidence of different layers of the painting process, realistic, partially rendered and beginning drawing lines.  This is my effort towards that ideal.

Lincoln Continental is a Ford Motor Vehicle which was produced in 1939 to 1948 and again from 1956 to 1980 and from 1981 to 2002.  It has been very distinctive, a highly equipped luxury car and it has lasted the test of time.  Overlaid onto the top of the car are images of poverty, the reality of homelessness and the efforts of many to overcome it’s devastating effects.  Winnipeg Harvest is one such organization which provides food for various shelters and mission organizations in Winnipeg’s downtown core.  Springs Inner City and Feed My Lambs Mission are two organizations that I had the pleasure of volunteering with.  I was also a recipient of Winnipeg’s food bank after experiencing a divorce.  Depicted in this mural are two of my favourite people; Bob and Louise Buchanan who helped me paint murals in Winnipeg, befriending me and promoting me.  Giving is a process which is good for the soul.  In life, there will always be people who have more than you and those who have less than you.  The key is to keep that in balance and always remain grateful.  The smiley face of a homeless man reminds me that joy is a state of mind and it can be found in the most devastating circumstances. 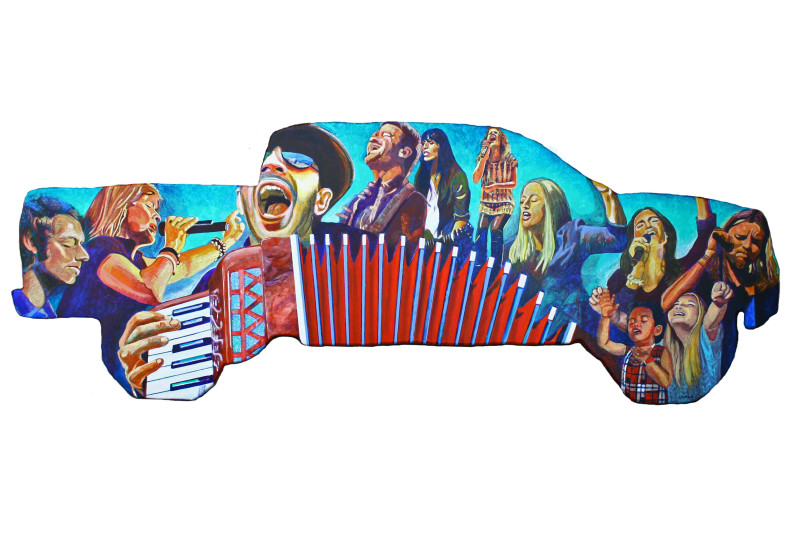 Here is the 6th painting in the series of 10 Ford Motor Vehicles spanning a decade in the 100 year history of the Ford Motor Company in Canada. The Oakville plant is now primarily building F150’s. The social behaviour painted onto the shaped canvas is of Praise and Worship, a positive Canadian behaviour.  I nicknamed it “Religious Redneck” because that is how people referred to us in Swan River, Manitoba: a small, remote town in northern Manitoba. Most of the musicians are part of Hillsongs Australia: an entire church dedicated to music ministry. This has effected how many “do” church in Canada.  They honour God with really cool, funky music and biblical lyrics. It has always been a passion of mine and I think I own most of their CD’s?  Over the past 20 years, large mega-churches have sprouted up across our country.  Springs Church in Winnipeg, Manitoba and Koinania Christian Fellowship in Bloomingdale, Ontario are two spirit-contemporary churches.  That means their messages are biblically based, poignant, relative and geared to meeting the needs of today’s youth, children and adults.  Traditional hymns have been replaced with praise and worship songs, created and sung by contemporary musicians and bands.  Many have been rejuvenated as their faith has grown relevant to every day life. 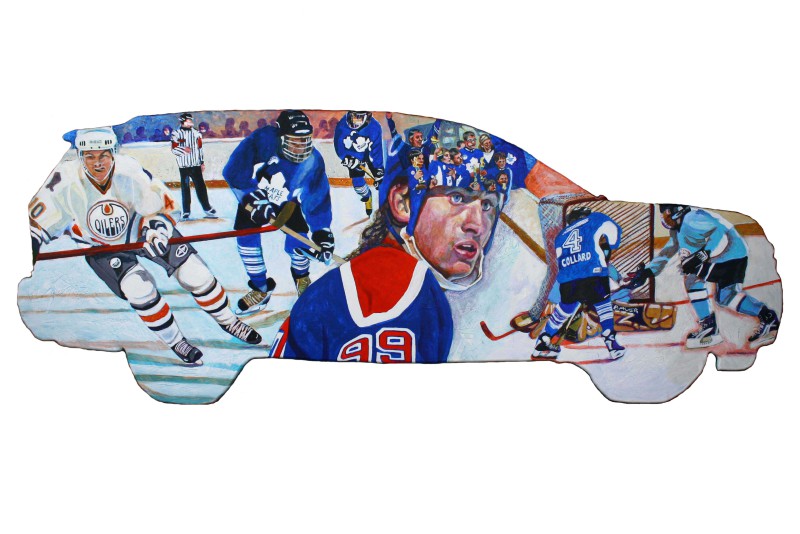 Hockey is a favourite Canadian tradition.  This is the seventh painting in the series of 10, illustrating house league hockey at North Wentworth Arena, a local hero Danny Syvret who made it into the NHL, playing for the Edmonton Oilers and Wayne Gretzky, a Canadian icon who was originally from Brantford, Ontario.  Gretzky was unstoppable during his career, with exceptional ability he understood the benefit of team-playing which increased his popularity and success.  My father, Terry Collard was the convenor of the Flamborough Hockey Association when I was growing up and when my sister Leanne wanted to play hockey, my Dad started the first girls hockey team in Flamborough, recruiting players (such as myself) and coaching.  Today the league is independent and strong.  Inside Gretzky’s helmet is an image of my son’s Leaf team winning the championship of house league.  Several of the images portray him shooting on net and skating.  My brother and his son are also long standing hockey players, playing rep and select hockey.

This car represents the positive social behaviour of teaching and learning.  My brother Jeff recently started a private high school; Discipleship Christian Secondary School (DCSS), in Bloomingdale, Ontario and these are a few of his students during inception in 2014.  My brother is depicted instructing his daughter Emma, son Andrew, Joe Paul, Iris Kim and Ariel Bondy.  To the far left is a reference to our Canadian heritage with children running to school in the 1950’s and lining up for the school bus.  The pink convertible I remember from several family picnics hosted by Ford.  They would gather all the antique cars and trucks outside the Central Office Building for a BBQ and have games and balloons for the kids.  I distinctly remember a pale pink Thunderbird.  It’s odd what the brain remembers?

The Crown Victoria was known in the 1990s as a police car all across Canada.  Ford had that contract for years and just recently released it to another company.  It had a very smooth drive but was very powerful.  Packed in these police cars would be teenagers, delinquents who have been caught drinking and driving, or doing illicit drugs.  Raves or parties are a common treat for the young at heart and they fill this canvas in a colourful way.

This 1956 Ford Fairlane characterized this fun era.  It was a time when fast food drive inn’s became a delicious option, replacing the home-style meals which so many were accustomed to.  A positive social behaviour is to eat a healthy diet, filled with fruits and vegetables.  My grandfather was a vendor on the Hamilton Farmer’s Market and the images painted on top of this car are taken from the Hamilton Public Archives and show my families stand.  A vegetarian lifestyle has become a preferred meal plan for many.

The Crown Victoria was known in the 1990s as a police car all across Canada.  Ford had that contract for years and just recently released it to another company.  The Crown Vic was a very smooth drive and was very powerful.  Packed in these police cars are painted images of teenagers, delinquents who have been caught drinking and driving or doing drugs.  This is a negative social behaviour which is NOT encouraged in Canada.