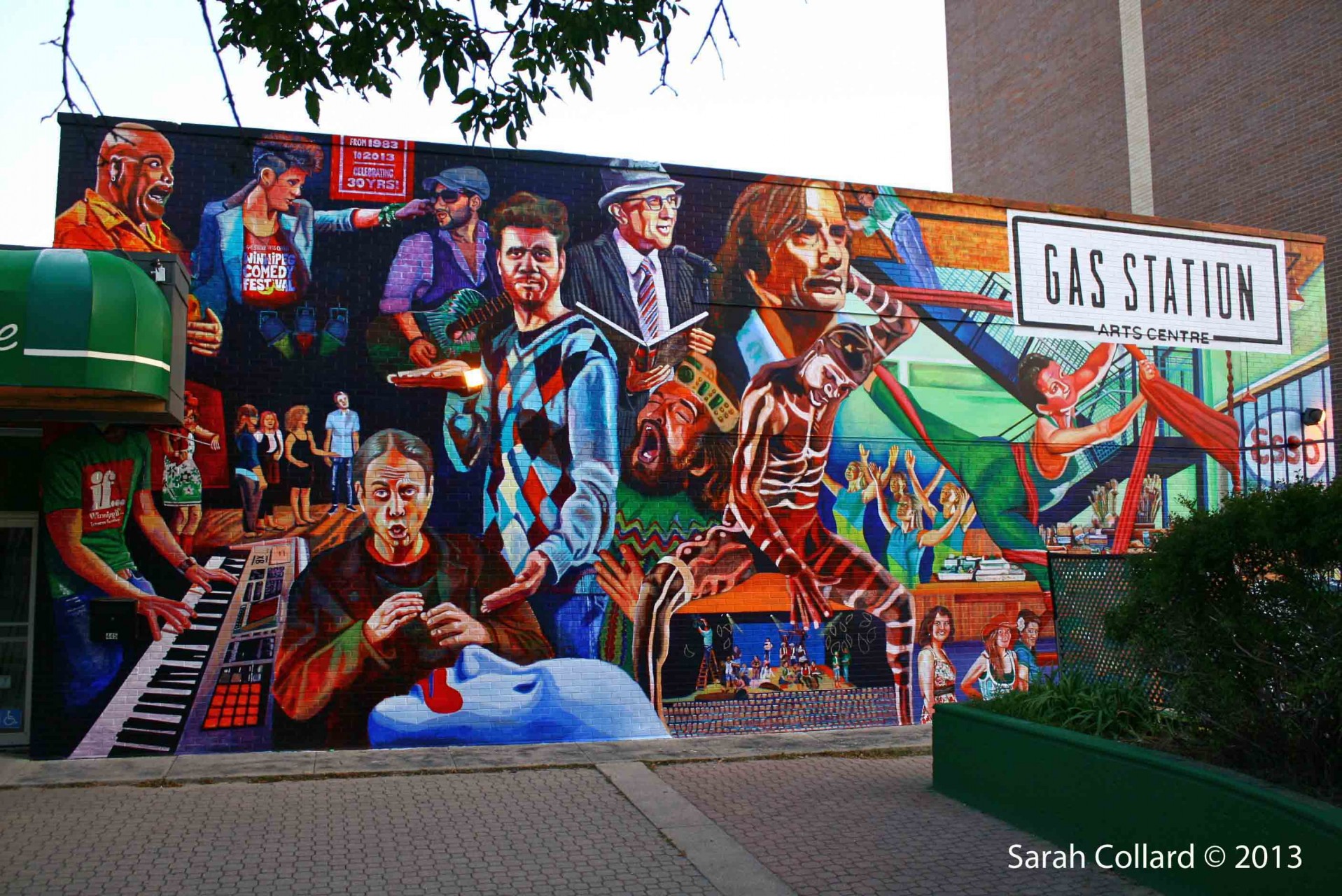 The Gas Station Theatre Mural was a joy for me to design and paint because of the amazing people I have met. The Gas Station Art Centre is a creative haven that brings together different artists from various disciplines under one roof. It was an honour to depict these talented people in an ambitious, fun Mural. I am very thankful to everyone who made it happen.

Who is in the mural? (left to right):

There are two items which were not mentioned which should be: 1. Esso Gas Station – why is it in the window? That is a historical photo of the original gas station which used to be located on that exact lot. The reason it is in the window is to signify its past. 2. The theatre cat is located beside Ian Mozden on the far right hand corner of the mural.

What is it about?

There are two parts to the Mural; the left side is mostly comedy and improv and the right side is mostly dance and drama. I wanted the left side to be portraits that could be recognized as fans line up at the door. The right side can be viewed from the street and I wanted this image to relate to the contemporary dancers who come from the United Church located in that general vicinity. My goal was to depict what the art centre is currently all about and where it is going in the future. They changed their name from “Gas Station Theatre” to the “Gas Station Arts Centre”. This name change suggests a shift in focus to include several arts communities. There are many different arts organizations that use the facility on a regular basis and they want their new name to reflect this interdependence upon them. For example, the nafro dancers meet out of the United Church which is located across the street. They also use the stage at the Gas Station Arts Centre. Nick Kowalchuk, executive director of the Arts Centre wants to expand the facilities to include artist studios, they are going to build out and up, to become a place where artists, dancers, actors, performers come to work and play. It will be a home away from home for many.

Duration and who helped?

It took one month to design this Mural and one month to paint. I did it all by myself with the exception of my children who helped me in the drawing stage for 4 days and a street person who volunteered one morning. The theatre hired Gary, the gardener to help me assemble and disassemble scaffolding every day. I worked 12 hours days for six days a week for thirty-one days. It was labour intensive definitely. It had extensive portrait work in it and since they were real people, I worked hard at making sure there was a likeness. It was a very fun Mural because all the people I painted came by the wall and got their pictures taken. I was also able to attend at least one of their performances to increase my understanding of their characters. Ian Modzden is one of my favourite actors as he is a very controversial fringe performer and takes risks I would never even dream of. Ian and Tanja, both dancers practiced every afternoon while I was painting the Mural. They were practicing for a new dance. The neat thing about that was, both Tanja and Ian were my life models for a series of drawings I did in 2008. Crumbs I was able to see twice during the Fringe festival in July. That was really neat because I grew in my admiration of improv; which emerges out of a random story told by someone in the crowd. Big Daddy Tazz and Chantelle Marastico, (stand up comedians) I saw during the Fringe festival and I laughed the entire time. I was immediately drawn to Al Rae because of his dry, sense of humour, similarity in marital status, wit and charm. I watched him and other comedians at Jeffries, a club in North Kildonan. I think my experience of interacting with the actors and performers helped me gain an appreciation for each person and their role in the Centre. It also made it fun.