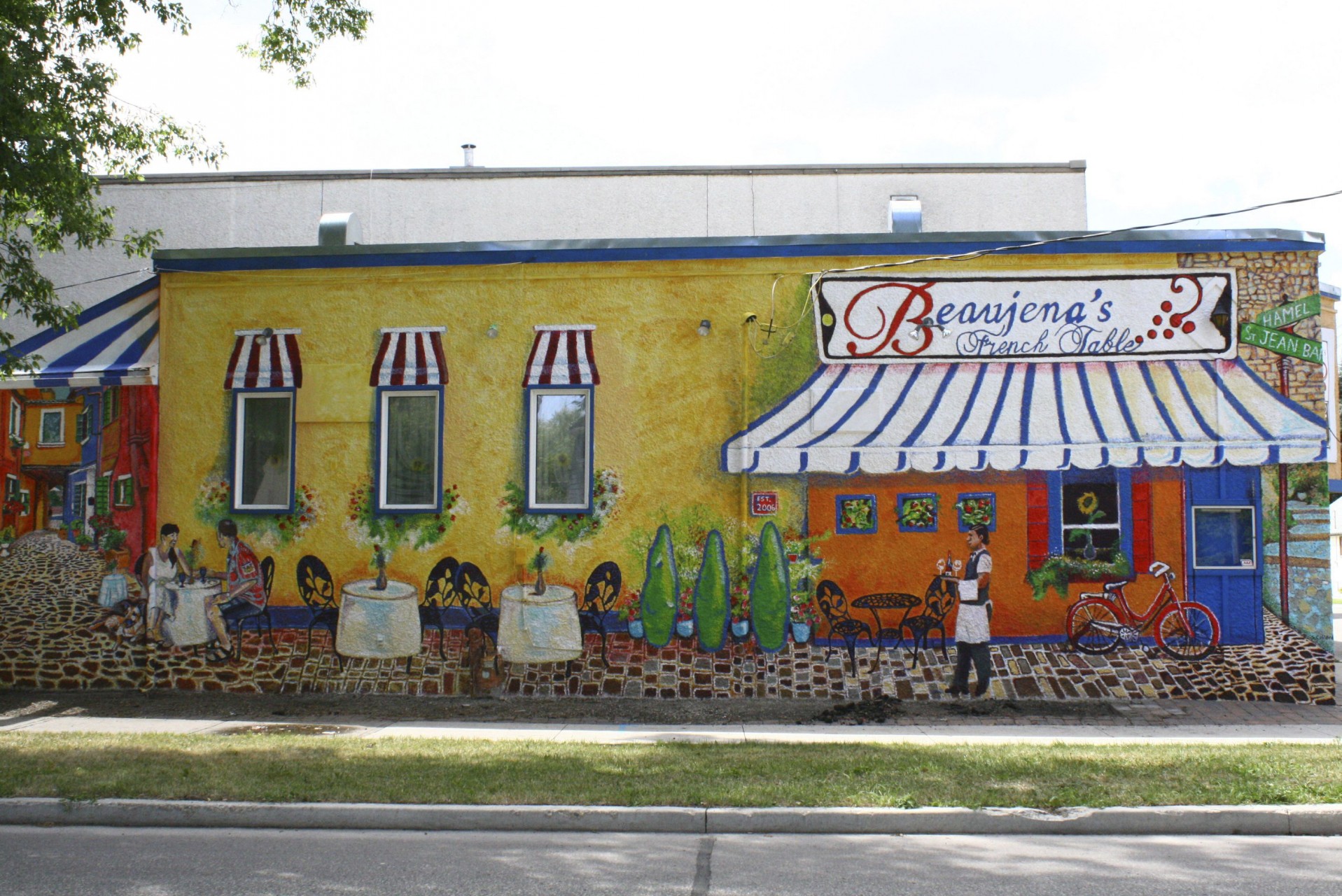 This is a bright, bold depiction of an outdoor cafe located in the French district. It serves a Parisian or Riviera bouquet of flavours to match the surprise suppers that chef Randy cooks up. The owners, Randy and Beaujena took over the premises in 2006 and have been cooking up feasts ever since. Open only on Friday or Saturday night (reservation only), the couple prepares and serves authentic French cuisine with at least 5 courses, catered directly for their guests. The wine tasting option creates a relaxing, romantic evening for couples, business associates or families. Tucked away in St. Boniface, on the corner of Hamel and St Jean Baptiste the commercial building will give you a wonderful, luxurious experience in this quiet, bilingual, residential area.

Many know of this building as the Red Barron, as it was formerly known, creating a historical reference to the area. Since the restaurant is Beaujena’s ‘baby,’ she held the vision. She wanted something that echoed what they already had on the front and interior of the building but they wanted to spruce it up a bit and make it brighter. Beaujena suggested an outdoor cafe with a quaint French promenade in the background and agreed to having their portraits somewhere in the mural. It had to have her characteristic table and chairs.  From a small fauvist illustration that Beaujena liked and a painting of Van Gogh’s outdoor cafe, I concocted a design that I thought was fitting for the location. She loved it, so it was a go.

The bike was my idea knowing that they are so popular in France. The window where the menu is placed was painted blue to match the blue door. I designed it so the door and window would merge and this worked perfectly as Beaujena came up with the idea to paint its interior. I recall spending much care on the French village ‘wrap around’ because it reminded me of my favourite part of Europe; the enclosed streets with towers of windows and tiny cobblestone footpaths (which cars frequently drove on). I had the thrill of traveling across Europe in 1991 (for 3 months) so I used part of that memory in the mural. It is surprising how those great adventures stay with you. My kids liked climbing the scaffolding, especially my son who was 12 at the time. Often I painted around the clock which was quite enjoyable since it was much quieter and cooler at night. I was determined to finish since I had three murals to paint that summer. As a whole I think it was quite a collaborative effort between myself and the owner. She had a clear idea of what she wanted and I tried to pull her desires and my expertise together. I think it was a good fit because we were all pleased with the results.