A Look at the Nook 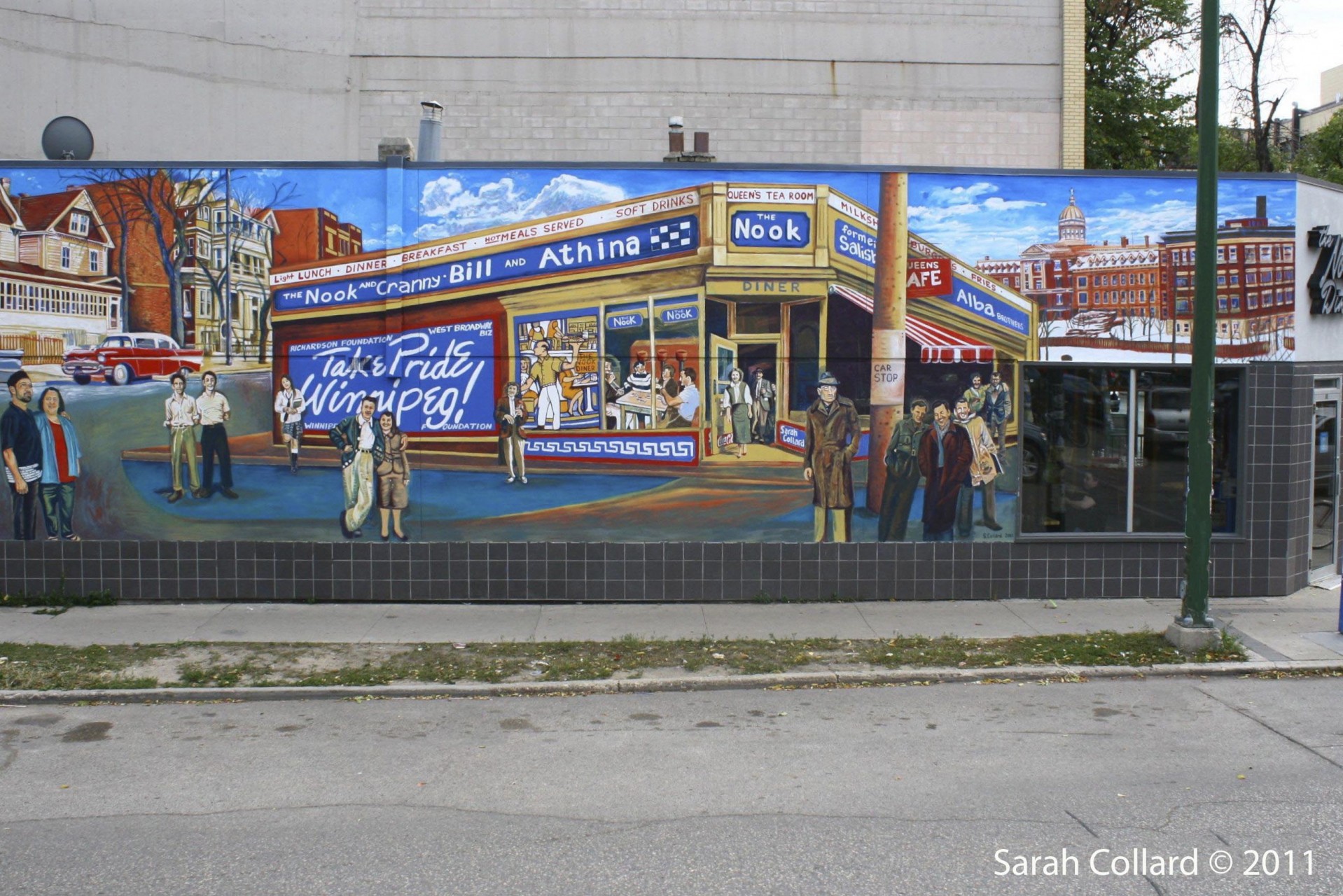 This popular breakfast stop is a long standing Winnipeg tradition. It has been a great place to get breakfast, lunch or supper and it has been the resting place for many tired nurses, students, patients, or just about anyone seeking a good meal. Mr. and Mrs Parasidis purchased the restaurant over 25 years ago from the Alba twins (Italian brothers) and have made a go of it ever since. Formerly it used to be a Salisbury house and hosted the typical red bar seats which were recently taken out but the booths remained.  Athina had collected several old photographs from patrons which showed the history of the exterior of the building and the many patrons that visited the establishment over the years. Together with a few other photographs from Misericordia Hospital, I came up with a design they loved. I went across the street to an attic in the hospital to find a photo of the original hospital taken in 1937 and the Single Mother’s Birthing Hospital that used to stand beside the Nook in a residential house (where the parking garage now stands). Athina requested that the image of their uniquely designed T-shirts be somewhere in the design. As well, I asked them if they wanted their portraits in the Mural and I took their photos; Bill and Athina arm in arm.

My goal was to recreate the past based on the historical photos. Most were taken around 1940-50 and were excellent depictions of the black and white era. I took one photo and extended its sides and imagined where it would be, dropped the neighborhood beside it, Misericordia Hospital to the right and voila. I filled it with people standing, leaning, laughing in groups or alone to make it look like the patrons of the past. I included Bill and Athina’s father who is standing in front of the door, looking like the Italian-Stallion (Sylvester Stallone). Behind them two figures emerge from the door with an old fashioned Coca-Cola advertisement below. Putting ads on the buildings was a way to pay for the building and was a common practice. In the old snapshots, the outside of their building was covered with Sweet Caporal ads which were elaborately painted. Former owners names such as Bill and Athina, the Alba brothers, Queens Tea Room and Salisbury House were painted on the side of the wall, along with the actual words that used to be painted on the top of the building: ‘refreshments’, ‘soft drinks’, ‘hot meals served’. My favourite part of the wall is the left side where the old birthing hospital stands in colourful detail and two old cars are parked. My Dad used to own a baby blue and red Ford Falcon so I thought of him when choosing the colours. The Alba brothers are posing side by side with the one cheekily stepping on the other’s toes.  The Nook was often open late at night and it was a great spot to go after hours when everything else closed. Often private school girls found themselves playing hooky in their seats. It was near several high schools such as Grant Park, St Mary’s, Balmoral Hall, Kelvin and Westgate. On the right a ‘Car Stop’ stands with several boys waiting for the bus. In the window the Parasidis family is sitting down to play cards, with the Uncle (with a broken arm) on the left and Mr and Mrs Parasidis on the right. This scene reminds me of my Scottish Grandmother who often plays cards and my (deceased) Italian Grandfather who would count money on the old table downstairs after a good day at the market.