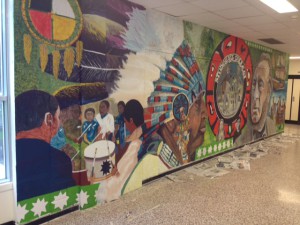 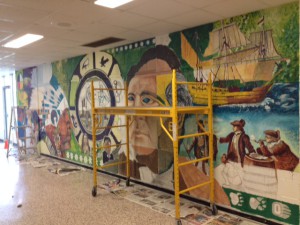 Students at Stonewall Collegiate in Stonewall, Manitoba have painted a mural to depict the cross pollination of cultures, a First Nations mural.  The school was given a grant to involve Aboriginal students in the idea forming and painting of this mural, so they hired me to help.  I got students to divide the space into a grid and draw each square individually.  It depicts Lieutenant Archibald signing Treaty One with Red Eagle  (Mis-koo-ki-new), an Aboriginal elder as well as the effects of the fur trade, European inhabitation, a drumming circle, Manitoba Residential Schools, the Star Blanket and the Seven Sacred Teachings.  Stonewall has a large number of Metis, First Nations students.  The original school is blended onto the coin in the centre, which depicts collaboration with a handshake.