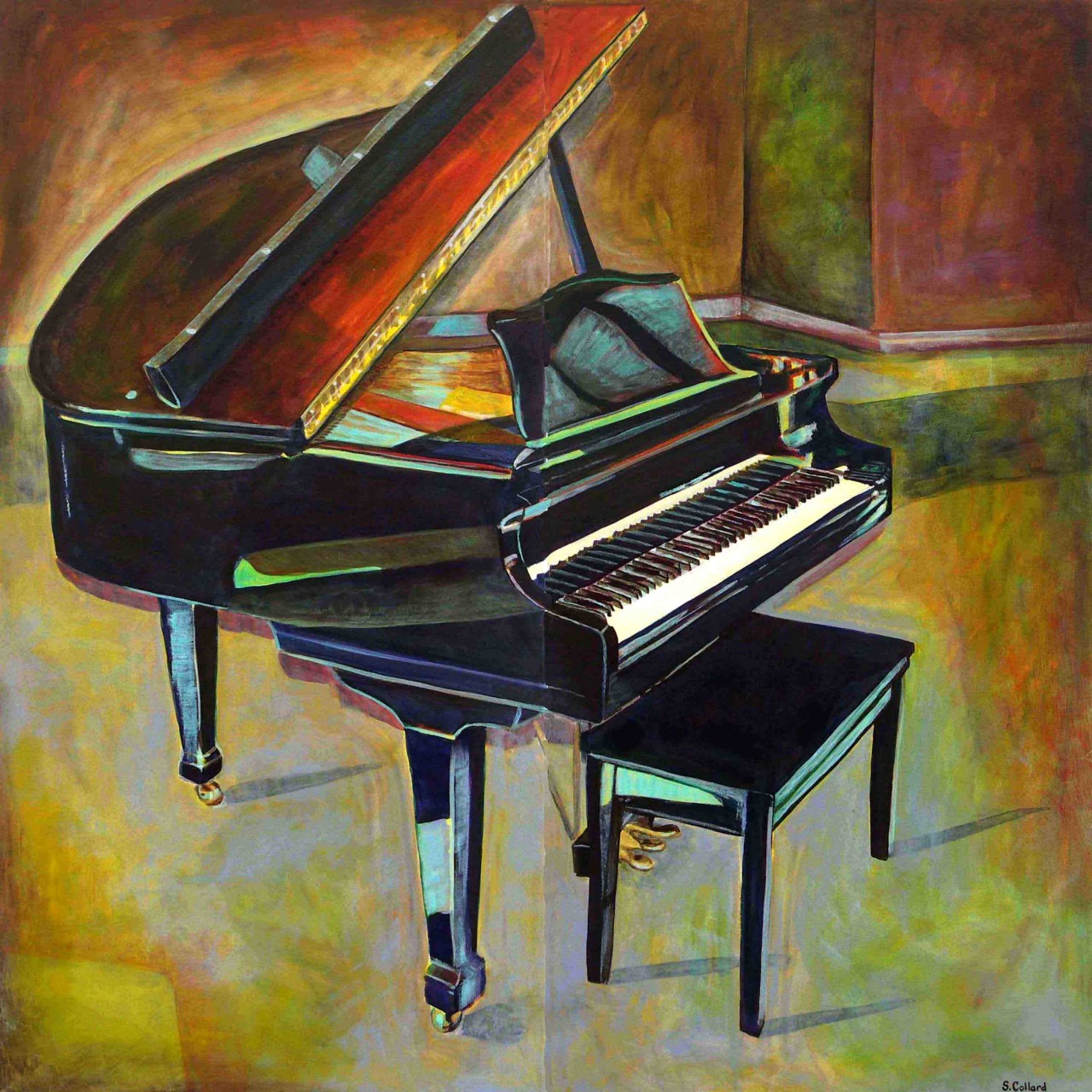 Music Loud, colourful, lively, acrylic paintings emphasizing a rich, vibrant palette. KISS is fun, impressionistic yet realistic; an exhibition that referenced heavy metal; Youthful instruments entwine in a musical stanza; staccato. I play with the intrinsic, intuitive aspects of creating a composition. Songs play an integral part of our daily lives whether they are heard on the radio, surround sound stereo, 4 part harmony, band class, during a concert or church service. Music is an important part of our lives. It is an universal language that surpasses logic and goes straight to the soul. It communicates culture, language and identity in an emotive manner. This body of work suggests the human aspect of musical instruments and our dependence upon them. The result is a series of photo-referenced bright abstractions. As the shapes increase in size they dematerialize and take on other meanings. Parallels are made to the human form, whether it is our sexuality, desires or passion. The subject matter begins with cold, metal or wood but increases in value as the object is used, adorned, laden, preserved and restored. A guitar that is kept from one’s youth and nursed through the years becomes ones ‘baby’. It is my hope that the viewer will relate to the work as music is in all of us. Over the years my paintings have taken different shapes as I have been influenced by those around me. In my early years in Swan River, Manitoba, Wilfred and Dale Wiebach were a huge support. They held exhibitions (Green Briar Art Gallery and Bookstore), sold my work, promoted murals and sponsored limited edition prints. This gave me the freedom to work full time as an artist and to learn how to be an ‘artist within community’. I would often paint commissions and murals that were client based but simultaneously work on a personal body of figurative work. I longed for the day that both would merge. Michael Boss from the Art Gallery of South Western Manitoba  (later became the art educator at the Winnipeg Art Gallery) was instrumental in mentoring and answering a million questions I had regarding art making and working as an arts administrator. This gave me support which boosted confidence. Upon arriving to Winnipeg I was impressed with the many murals in the city especially the Signs and Wonders and Charlie Johnson murals.  My students and I took a bus tour of the murals of Winnipeg which we planned from www.themuralsofwinnipeg.com website. This stirred a hunger in me. I painted a mural in Toronto, Ontario and met a fellow artist, John Kuna who is known for his murals in the village of Islington. Watching him paint in translucent layers motivated me to use glaze and add realism. I had known of the Flemish technique from Melissa Doherty a colleague from Waterloo, Ontario but I had never used it myself. Applying the complementary colour to a shadow creates a darkness that illuminates. This eliminates the need for black in a composition. Toronto artists; Alan Bender and John Nobrega have introduced me to the Danish/Flemish colour approach. When painting this exhibition I purposely implemented this formula which you are now witnessing. See the Music Gallery